By DANIELLE HATCH of the Journal Star

Colin Flavin didn’t have any memories of the bustling city of Seoul, where he was born, or the foster mom who cared for him during the first months of his life. 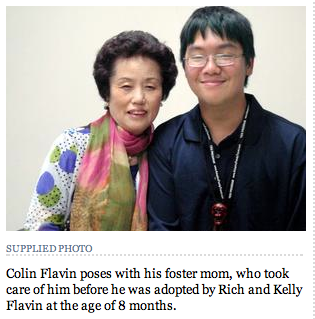 But the Metamora teen, who was adopted when he was 8-months-old, recently got some insight into his early days during a journey to South Korea. Flavin traveled to the country in June, as part of the Adoptive Family Homeland Journeys & World Ties program. The program links adoptive families with their child’s birth country.

Colin’s parents, Rich and Kelly Flavin, arranged the trip as an eighth-grade graduation present for their son.

They traveled with 18 other families from around the United States and Canada, accompanied by workers from the Ties program. “We always knew we wanted to do a homeland journey, we had been talking about it since Colin was really little,” Kelly Flavin said.

During the two-week trip, from June 24 to July 6, the family explored the country, soaked up the culture and visited spots linked to Colin’s early days.

He also got to meet the woman who served as his foster mother. “I think she was kind of expecting me to be smaller,” said Colin, who was born premature and weighing just 4 pounds. Now, he is 6-feet-tall and a freshman at Metamora High School. He juggles activities that range from scholastic bowl to marching band to robotics.

According to the Ties program website, Adoptivefamilytravel.com, the trips give children the tools they need to form a healthy identity, linking the culture they were born into with the culture they live in. The program, based in Wisconsin, now organizes journeys to 13 countries. In Korea, the Flavins visited the beach city of Busan and the fish market there, which had kiddie-pool sized vessels of live octopus, eel and squid for sale. “It was like going into a warehouse like Lowe’s but lined with all these fish vendors,” Kelly Flavin said.

They took a cable car at Mount Surak National Park and Forest, and visited the tunnels of the demilitarized zone between North and South Korea. They enjoyed Korean cuisine, including photteok, a sweet, doughy Korean doughnut sold by street vendors. In Seoul, they ate dinner with a host family, took a riverboat ride around the city, and ventured to the top of the Seoul Tower, where they admired the view of the city from the highest bathroom in Korea, at 1,574 feet.

READ MORE IN THE JOURNAL STAR