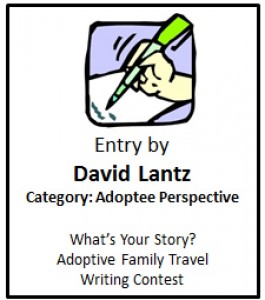 “When you are eighteen and you graduate from high school, I promise we will visit Russia.” Hearing these words come out of my mother’s mouth, I was determined to graduate from high school. My name is Dave and I was adopted from Russia in 1994, just before my second birthday. My mom never hid the fact that I was adopted, and would say, “You came from another woman’s tummy and became a part of my heart.” I was always curious about my life, and where I came from. The fact I was adopted from Russia, a place I had never heard of, was interesting. Mom educated me on Russia. She also became involved in the local Families of Russian Ukrainian Adoption (FRUA) group, constantly going to events and meeting others. The event that stood out the most to me was the Christmas party and getting to see Grandfather Frost. All of this helped me to understand, learn and appreciate where I came from and who I was.

One iconic image that usually pops up when people think of Russia is St. Basil’s Cathedral in Moscow’s Red Square. I was always inspired and intrigued by its beauty and size; the large brown building topped by giant, colorful onion domes that look a lot like soft serve ice cream. This image became engraved in my mind. The cathedral was even my inspiration for a painting I made and received an honorable mention in eighth grade, and it was entered in our local art show. Although it did not win, it was special. Then in 2010 I graduated from Purcell Marian High School, and that summer mom and I went on a journey that would change our lives.

I was awakened by my mom telling me that we were about to land in Moscow. I quickly became excited and wondered what would happen. We landed and met our translator and Russian guide for the trip, Katya. She was tall, skinny, had blonde hair, and wore glasses. The first thing, we noticed was her smile and enthusiasm. The American guides on our trip were another very tall and skinny woman, named Gail, and the other was short and named Deb. They acted as liaisons to help us interpret our feelings about our trip.

As soon as we landed, we collected our luggage and went out into the parking lot. It felt as though we had just walked into an oven. It was so hot and muggy and smoke seemed to overtake us. “We’re currently experiencing a rash of forest fires around Moscow,” Said Katya. “It’s ok though, we’ll pick up some masks and water and we’ll make it through this, and still have fun.” We were put in a bus and given a driving tour of Moscow. As we drove by St. Basil’s and Red Square, time seemed to slow down, and through the thick smoke, we could make out the domes and towers. Part of me wanted to yell, “STOP THE BUS, LET ME OUT, I WANT TO SEE THE CATHEDRAL!!” But as with any trip we had a schedule. We arrived at the hotel, and checked into our rooms. After that we got a lot of water bottles. Again, just like in America we were bombarded by images of St. Basil’s. The first night we saw the national dance team’s show, and the background of the stage was an image of St. Basil’s. Although I thoroughly enjoyed the trip, my mind kept going back to Red Square and the cathedral. Eventually, after what seemed like a lifetime of waiting, the day came that we were going to Red Square.

We all awoke and met in the lobby; Red Square was so close we could walk there. The walk was about ten minutes from the hotel. Before stopping at Red Square, we saw the Kremlin, but I was anxious to move on. We made our way to Red Square and arrived before the gates opened. A rush of feelings came over me—excitement, anxiety, happiness, and worry. I couldn’t hear anything, and I was zoned out. “Hey man, you ok?” said one of my friends. “Yeah, it’s just … I’ve been waiting to see the cathedral since I could remember. My mom always showed me it, talked about it, and it’s hard to believe that my dream is about to become a reality in a few minutes.” He looked at me and smiled and said, “Then let’s make it special.” He stood up and said in a loud voice to the group, “Hey everyone, Dave here has been dreaming of seeing St. Basil’s and Red Square for a long time. Even longer than most of us have been alive, so let’s be respectful and let him have a few minutes alone to observe it.” All at once everyone nodded their heads in agreement.

The gates were opened, I took my mother’s arm, and we walked into Red Square together. The smoke was so thick we couldn’t see very far in front of us. As we walked, with the group following us, we made our way to the cathedral. As we advanced closer, the smoke seemed to dissipate, the sky opened up, and the sun shone down. Out of the smoke, the three golden orbs were visible and slowly after that the domes, and the rest followed. All of a sudden, I stopped in my tracks and I was overcome with emotion. My eyes started to water, and it may have been from the smoke, but I like to think they were tears of joy. “It’s amazing and beautiful!” said my mom. “What do you think, Dave?” I couldn’t think, I couldn’t describe my feelings, and I didn’t know how to put them into words. All I could say was, “Yeah”. Eventually I came out of this euphoric state of awe and amazement. I took a ton of pictures with my mom, and some by myself. In the end it was the highlight of the trip because it represented the culmination of a childhood dream. To be surrounded by this image, constantly wishing to see it, to dream about it, to envision it, and study it. In a way this building became a connection I had with my birth country.

When I agreed to go on the trip, I learned that for me, the chances of seeing or knowing anything about my biological family was not likely. I felt that my experience had to mean something. Through this small event, I made my trip special and more meaningful than I could ever fathom. The trip over all was amazing, I met great people, and I overcame some insecurities, I may not have gotten the answers I wanted answered, but I made a new family. I shared my knowledge and support, I cared for others, and I really had fun. 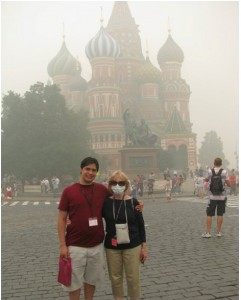 After reading a story, click here, find the story and vote.
Liking and commenting are your way of voting. Comments cannot be random, i.e. they must have substance.
Voting deadline: December 9, 2015, 9 a.m. CST