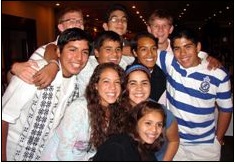 We all crave it, and many kids find it among their peers as they visit their birth country.

Remember Maslow’s famous hierarchy of needs theory? If you’re a little rusty on that, here are the Cliff Notes. Maslow held that people must have basic needs like food, water, safety, BELONGING and self esteem met before they could achieve their individual potential.

In schools, for example, children who feel they belong have been noted to be happier, faster, more motivated learners. Research further shows that children who have a sense of belonging are less likely to experience a myriad of mental health issues.

Pretty much any way you look at it, “to fit into a group naturally” (Webster’s definition) is a good thing. Some of our kids do that well—finding common bonds related to interests, sports, and religion, among other things.

Some of our kids struggle with “belonging” even at the most basic level.

Kids who have been adopted internationally have an extra layer of belonging to incorporate into their lives. They often lack a sense of belonging that comes from being part of a community that shares a common race and/or ethnicity. Further, many kids do not have a family makeup that is the same as the majority of their peers.

So, how does a homeland journey help fill that gap?

By giving kids a community of peers where generally their sense of belonging is quick to take hold,
and seeped in profound meaning because the connection is based on the core being of each person.

The importance of kids sharing this experience with other adoptees and their families cannot be overstated. The kids quickly realize they have a community they can be part of if they choose—other international adoptees who share their experience of having a foot in two different worlds.

The entire piece of having-to-tell-the-whole-story pretty much dissolves as kids look around and find they are traveling with other kids who just “get it.”

“It was better to travel with other kids because they were all like me and could relate to the situation like I could,” said Gabrielle Istvan, who was 12 when she traveled. Emily Kurijian, age 20 remembered feeling “There were a lot of kids my same age and I learned that what I think and feel about my adoption is normal, and I am not alone.” And, fifteen-year-old Nicholas Brunson summed it up this way, “We came here as strangers and left as a family.”

As an added benefit, when it is time to board flights for the trip home, these strangers who have become family continue their relationships in some amazing ways. Holly Bressner writes “Our daughter keeps regular contact with her group of friends from the trip thanks to the wonders of Facebook and texting! They bonded like glue from the very beginning, in the airport while waiting for our flight! Last summer we even met three of the other Midwest families for a weekend and the kids picked up right where they left off!”

The Bressners are not alone. Over the years, I’ve been privy to hundreds of stories of gatherings of friends who found belonging while traveling. One family with three children told their kids they were going camping for a week at the end of the school year and each child could choose a friend to go. They each picked a Ties’ friend—each FROM A DIFFERENT STATE!!!

We often hear, “Wow! I am not alone. I have made friends that will last a lifetime. It feels so good to belong,”

Maslow is smiling, and so am I.