Identity is a continuum.
Who I am today is not who I will be tomorrow.
For tomorrow I will be a culmination of who I have been
in all my “yesterdays” and who I hope to be in my “tomorrows.”

This is part 2 in a series on identity and international adoption.

Birth Country Travel: Upon Arrival
Creating a New Vision of Self 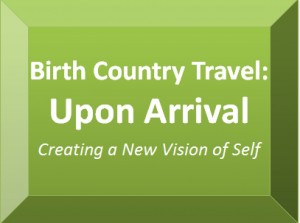 As kids step off the airplane and onto “home soil” a universal moment happens. Beneath the airport chaos, it’s like you can hear the thought: “Wow, everyone looks like me.”

And then the actual conversation begins. The kids talk about this a lot and find it both overwhelming and comforting. A new very “visual sense of self” begins to take shape, one that transforms with each and every experience and interaction as we are traveling.

Arrival stirs not only a visual sense of self, but a plethora of emotions as well.

Perhaps one of the most telling accounts of the emotions around “upon arrival” I have ever read, came from Julia Mendelson. Slightly edited and shared with her permission, Julia’s writings were profound, one of her many gifts to the world.

“When I returned to Korea (for the first time since I was 8 months old), I went under the delusional self-convinced theory that I was just going because I love to travel and had the opportunity at a fully-paid, friend-escorted trip. No, it would not matter one bit that I was born there. Adopted from there. That would never affect me, I convinced myself.

Shock! Hurt! Confusion! It smacked me in the face like something I never knew possible from the moment I stepped off the plane. Those faces – my faces – followed me everywhere. I became paranoid. Enraged. Repeating to myself ‘just a college trip’ in my head.

I never felt so close to be being found and so lost.

I went to ‘powder my nose’ in the airport a moment after my arrival. As I leaned in to wash my hands a middle-aged woman next to me asked me something in Korean. I looked up at her through the mirror in front of us and I gasped out loud. ‘Is that HER?’ was the thought that shot through my head. This was the beginning of a series of absurd thoughts that expressed desires I never knew I had.

The woman gave me a dirty look that clearly said, ‘What the hell is her problem?’ and shook her head in disbelief and walked out.

I wanted to run after her! I wanted to grab her by the arm and yell to her in the language I know not even one word of and say, ‘You’re my birth mother! Aren’t you?!’ Truly, I had gone insane.

As I was walking out of the ladies room I was imagining that she would turn around, embrace me and with tears streaming down her face, she’d say, ‘Julia? My baby! I missed you.’

At that moment I stopped dead in my tracks, looked up and saw before me the hundreds (or so it seemed) of middle aged Korean woman. All possibilities.”

Other kids describe the experience differently, but clearly filled with emotion. Emily Freeman, who was 15 when she traveled, writes, “Wow! When I first arrived, I was a complete mess. I had all these emotions in my head. I was so excited to be there, but also nervous that it would not be what I thought it was.”

And Carmen Knight describes it this way, “As we landed I was in complete awe of what I saw, the beautiful mountains and buildings. This was where I was from, this was my first home.”

Younger kids tend to arrive one of two ways-tremendously excited or “I-can’t-stand-up-tired.” Either way, once they get their bearings, we hear things like, “Wow, everyone looks like me,” said with both enthusiasm and anxiety. Some kids verbalize, “Oh my gosh, my parents won’t be able to find me.”

But then reality strikes. “Oh yeah, I’ll be able to find them!”

As they wait the short time in the airport, their eyes are already scouring the scene, making lots of comparisons about pretty tangible things. “Hey, they have Coke here, but it’s in smaller cans.” Or, “Look, they have Inca Cola, not Coke.” Soda cans seem to be a “hot topic” because it is something kids can readily connect with.

In time, most go deeper in their thoughts. Way deeper. And by the time we are ready to leave, most kids feel a real connection to their birth country, and are anxious to find ways to keep those connections alive.